Quinoline and benzimidazole derivatives are known for their excellent potential for various pharmacological activities. Many marketed drugs contain these two heterocycles in their structures.

Structure of quinoline and bezimidazole

Fluoroquinolone antibiotics, which have a fluorine atom in their molecular structure and are active against Gram-negative and Gram-positive bacteria, account for nearly all quinolone antibiotics currently in use.1 Ciprofloxacin, gemifloxacin, levofloxacin, moxifloxacin, and ofloxacin are fluoroquinolone antibiotics.2 Thiabendazole, flubendazole, astemizole, lansoprazole, and omeprazole are some of the commercially available benzimidazole-containing medications.3 There is an important place in drug discovery for quinolinyl and benzimidazole heterocycles. This review article focuses on quinolinyl and benzimidazole conjugates for their analgesic, anti-inflammatory, antibacterial, antifungal, antiviral, anti-parasitic, anti-Parkinson's disease, anticancer, antioxidants, antidiabetic, anticoagulant, and antimalarial activities. Most of the researchers have studied quinolinyl-based benzimidazole derivatives as models for the development of new antimicrobial agents.

El-Feky, S. A.et al.synthesized Benzimidazole and fluorinated quinoline derivatives and tested for anti-inflammatory activity and ulcerative effect. As they were an ulcerogenic activity, the most active compounds (1a-f) were found to be superior to celecoxib. Compound 1a showed the highest anti-inflammatory activity as well as the best binding profiles at the COX-2 binding site. It is stated that the existence of the acetamide linker in compounds 1a–f could favor activity over the non-substituted benzimidazole derivative.(Figure 1).6 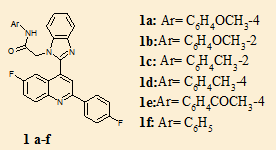 Brajša, K. et al. synthesized amidino-replaced benzimidazole and benzimidazo[1,2a] quinoline derivatives and studied them in 2D and 3D cell culture systems for their cytotoxic activities. Synthesized compounds were tested as a small platform to compare antitumor activity in 2D and 3D cell culture systems and comparison with the relationship between structure and function. A human cancer breast (SK-BR-3, MDA-MB-231, T47D) and pancreatic cancer cells (MIAPaCa2, PANC1) have been tested with the 3D cell culture method. Compounds have shown moderate to potent activities as compared to standards (Figure 3).7

Garudachari, B. et al. synthesized Benzimidazole-quinoline derivatives and tested them for antimicrobial activities. The compounds weres screened using a well plate method (inhibition zone) for their antibacterial and antifungal activity invitro. There result showed strong antibacterial activity in compounds 3c, 3d, 3ac, and 3ad. It was found that the compound 3ab is a powerful antifungal agent. Compounds 3a, 3aa, and 3af showed Moderate to good antimicrobial activity.8

For their anti-cancer and antibacterial activities, quinoline and Benzimidazole derivatives are mostly studied. Various derivatives identified have demonstrated excellent biological activity. Synthesis and study of such designed molecules can lead to potent drug candidates being discovered.